QO-100 is the first amateur radio satellite with a Wide Band Transponder (WB) for DATV operation.

The DATV beacon is currently transmitting a continuous loop to help users with reception and optimisation of the reception system.

The video beacon has the following parameters:

WebSDR with spectrum display and chat

A real-time spectrum display including Chat about the coordination of the broadcasts can be found here:

Currently, there is no official web-based video stream. However, individual OMs occasionally stream their video reception. For more information, see the AMSAT-DL Forum.

Modern DVB-S2 capable commercial satellite receivers are almost all capable of receiving the 2 MSym/s broadcast from the beacon and also displaying video and audio.

Unfortunately, an unmodified LNB will convert the RX frequency from 10492.50 MHz to 742.5 MHz, which is outside the typical frequency range of a satellite receiver (from 950 MHz to 2150 MHz). The AMSAT-DL downconverter provides a suitable frequency conversion for these cases, as it mixes the 742.50 MHz with 595 MHz on its WB path to an output frequency of 1337.50 MHz. This allows reception of the AMSAT-DL video beacon with a standard DVB-S2 satellite receiver.

Since symbol rates greater than 1 MSym/s require a high EIRP (i.e. very large antennas and a lot of power), most stations operate at lower symbol rates of 500 kSym / s or less. The reception of these signals is usually not possible with conventional satellite receivers. The AMSAT-DL therefore recommends the MiniTiouner Version 2, which is available as a kit from BATC, for example: 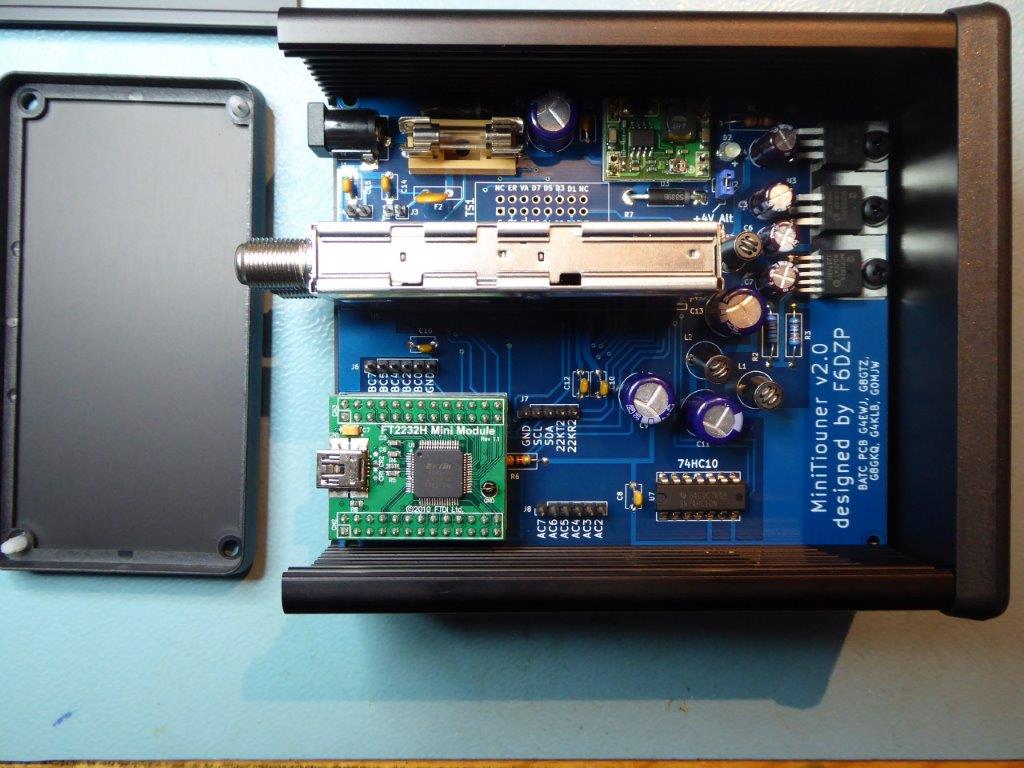 Together with the MiniTioune software by Jean-Pierre F6DZP and a Windows PC, symbol rates down to 66 ksym/s can be achieved. As an additional feature, the frequency range of the MiniTiouner is between 143 MHz and 2450 MHz, so that a direct connection to an unmodified LNB is also possible without the intermediate switching of, for example, the AMSAT-DL downconverter.

Further, the BATC has compiled information and experience in DATV reception of QO-100: https://wiki.batc.org.uk/Receiving_Oscar_100_DATV_signals.