Coordinator for school contacts via QO-100

In October 2020, “Charly” Eichhorn (DK3ZL) was officially appointed by the AMSAT-DL Board as the new coordinator for worldwide school contacts with DP0GVN at the German Antarctic Neumayer Station III of the Alfred Wegener Institute (AWI). The appointment is made in close consultation with the AWI and the responsible radio amateurs of DP0GVN.

Charly DK3ZL can be reached at the e-mail address dp0gvn@amsat-dl.org and will endeavour to arrange a speedy mediation.

At the request of the AWI, we would like to point out that direct contact requests to the Alfred Wegener Institute or even to DP0GVN via direct eMail shall be avoided! These would tend to disrupt regular operations there.

The AMSAT-DL team would like to take this opportunity to expressly thank Heiner Jürs (DD0KP) for his activities to date, who unfortunately can no longer actively support these activities for health reasons.

DARC e.V. and AMSAT Deutschland e.V. have jointly launched a project to equip a total of 12 educational institutions in Germany for radio operation via the geostationary QO-100 satellite. DARC and AMSAT-DL have concluded a cooperation agreement in which both associations finance this time-limited action equally, i.e. half each.

Responsible for the final distribution and support in setting up the school stations is now also Charly DK3ZL, who has taken over this task from Heiner DD0KP for health reasons.

Many schools in Germany supplement their school curriculum with voluntary working groups. Radio amateurs offer amateur radio in many places within this framework and have even set up their own radio stations and antenna systems on school buildings.

Radio contacts with DP0GVN at the Alfred Wegener Institute’s Neumayer Station III in Antarctica are currently very popular. This has only become possible with the first geostationary amateur radio satellite Qatar-OSCAR 100 (QO-100) and after AMSAT-DL provided the appropriate radio technology for DP0GVN.

Until now, it was almost impossible for many interested people to get in touch with the radio amateurs who are also responsible for the technology there. Direct radio contact with Antarctica has been possible at any time since February 2020 via satellite and is certainly a fascinating experience.

Similar to the ARISS contacts with the International Space Station ISS, such connections also allow pupils to experience the direct experience of the scientific staff on the station “live” on site and ask questions.

Charly DK3ZL will provide the interested teachers and volunteers with the knowledge and the network for interesting radio connections, accompany the setting up of the stations and especially organise the corresponding radio contacts with the German Neumayer Station III.

As a contrast to the contacts in Antarctica, Charly would also like to arrange additional school contacts in Africa, for example Namibia.

First school contacts have already taken place and in the meantime further radio contacts could be firmly arranged for the beginning of December with DP0GVN on Neumayer Station III with several schools in Germany. The pupils can even ask special questions about a research topic in Antarctica, after appropriate preparation with the support of their teachers in the subject lessons, because next to the IT engineer Roman, HB9HCF, a scientist will sit at the microphone of the station and then answer these questions live. 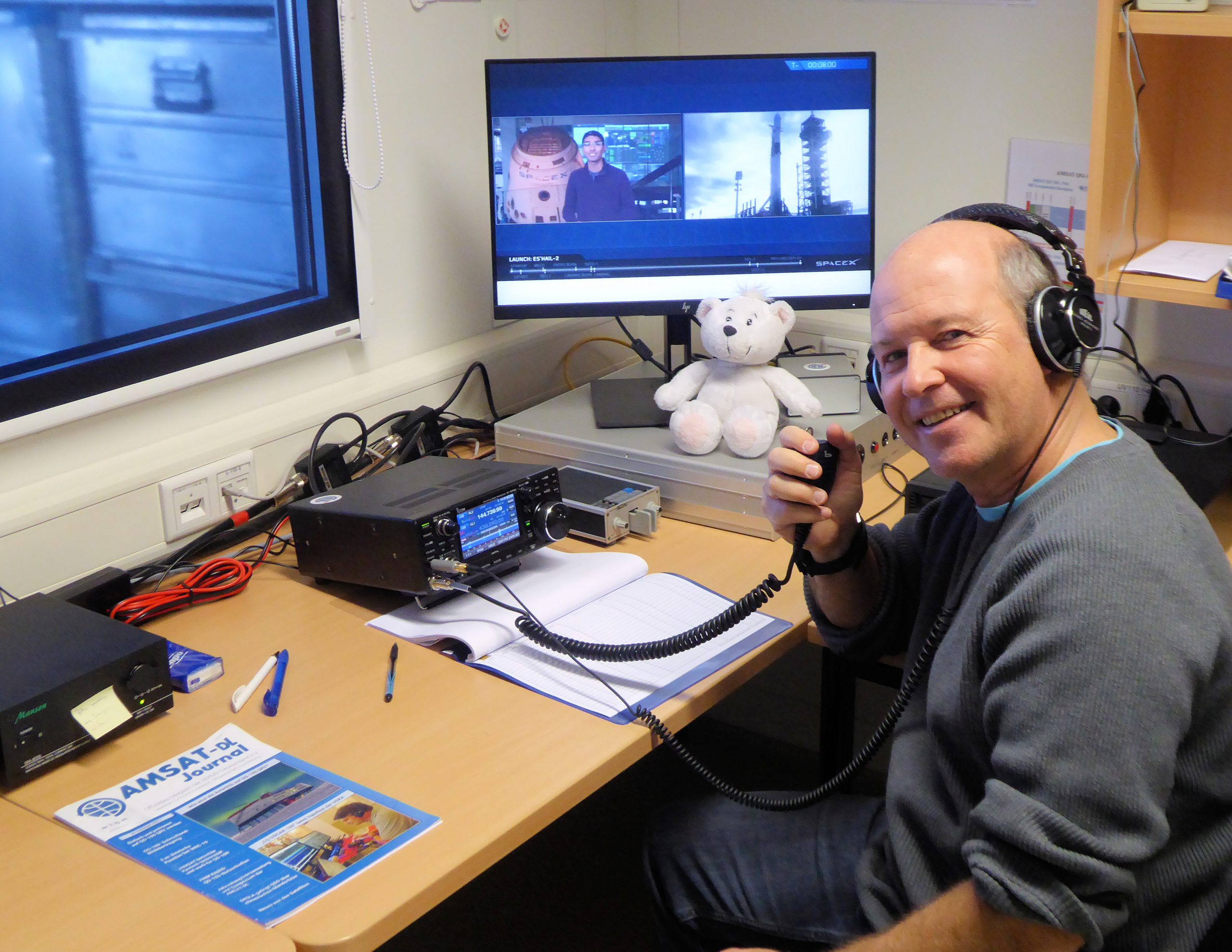 Charly DK3ZL would like to clarify here once again that, in principle, any school or educational institution that has, for example, an “amateur radio” working group with an educational callsign is able, through the support of local radio amateurs, to establish a connection via the geostationary satellite QO-100 with a permanently installed or portable station, is welcome to inquire with him about arranging a radio contact to Neumayer Station III. This offer is not only aimed at schools in Germany, but at all schools within the reception range of the QO-100 satellite!

For the higher grades in the schools (grades 10 to 13), such a contact with one of the scientists working there certainly brings an enormous gain in knowledge and motivation after appropriate preparation in class, but it must always be taken into account that the scientists as well as the IT engineer (currently Roman) always have a very tight work programme on site and are therefore only available for an hour in the morning every now and then.

Contact between younger school years is also possible, but then with Roman alone, without the participation of scientists. Such a contact can be arranged quite well in the afternoon during the IT engineer’s free time and is certainly very exciting.

For young students, Charly can alternatively organise a German-speaking contact to Namibia’s wildlife. NARL Chairman Werner, V51JP, will be happy to answer questions about life and wildlife in southern Africa. He is happy to take the time (morning or afternoon) for a contact via QO-100.

The next wintering crew is expected in Antarctica in January 2021. It is very pleasing that a very motivated YL with DP0GVN will continue to ensure radio operation via QO-100 in her free time in 2021/2022, even though she will certainly have a lot of work to do. AMSAT-DL hopes that with the new DATV equipment, live video transmissions in HD from Antarctica will then be possible for the first time.