How will Antarctica be QRV on QO-100?

From the idea to the realization

Even during the construction and before the launch of Qatar-OSCAR 100 (P4-A), we dreamed of spectacular DX connections to rare places on Earth. Of course we also thought about how it would be if students could establish contact with Antarctica via amateur radio: Just as it is often practiced at schools with ARISS and the International Space Station ISS. The only difference is that you are not dependent on the ISS overflight times and are not under time pressure! How would it be, if besides voice radio (SSB) also high quality live transmissions (DATV) could be realized in DVB-S2 format? In times where the climate change is everywhere present, an ideal topic to connect the instruction in the schools also with the amateur radio thought. By the way, emergency radio operation is also an important aspect, because even the existing commercial satellite links and shortwave do not always work.

These arguments have also convinced an institution in Antarctica, details will follow in due course.

Time is of the essence

While we sweat here in the northern hemisphere, Antarctica is in nine months of hibernation at this time of year. So it is high time to make all the preparations so that our station can be set up and put into operation in the coming Arctic summer. The date for the departure of the transport ship has already been set. But there are a few things to consider, especially the weather in Antarctica. A simple portable station for QO-100 is not enough.

Everybody talks about the weather, we do too!

Strong winds prevail in Antarctica. They are caused by warm air masses flowing in at high altitude, which form a high-pressure area with a stable fair-weather centre over the central plateau. These air masses cool down, sink downwards and flow off towards the coasts (downdrafts). Very high wind speeds prevail, especially in the eastern areas. The storm region of King George Victoria Land records 340 storm days a year with wind speeds up to over 300 km/h. Precipitation in Antarctica falls mainly as snow and mainly in the winter months. In the area of influence of the high-pressure area in the interior of the Antarctic, precipitation is produced exclusively by the cooling of the sinking high-altitude air. With less than 50 mm per year, precipitation in Central Antarctica is very low, making it a dry ice desert. Precipitation increases from the interior to the coastal regions, amounting to about 600 mm per year on the coasts. On the offshore islands, the average annual precipitation can be up to 1,000 mm. (Source: Federal Environment Agency)

Due to the extreme weather conditions, it quickly becomes clear that a parabolic reflector for receiving and transmitting via the geostationary QO-100 / P4-A satellite must be appropriately protected from the weather. Ideally within a radome, comparable to our 20-meter antenna in Bochum.

Fortunately Felix DL5XL managed to find a ship chandler who was willing to organize a suitable antenna with radome for mounting on the station building and to bring it to Bochum to the headquarters of AMSAT-DL and observatory: 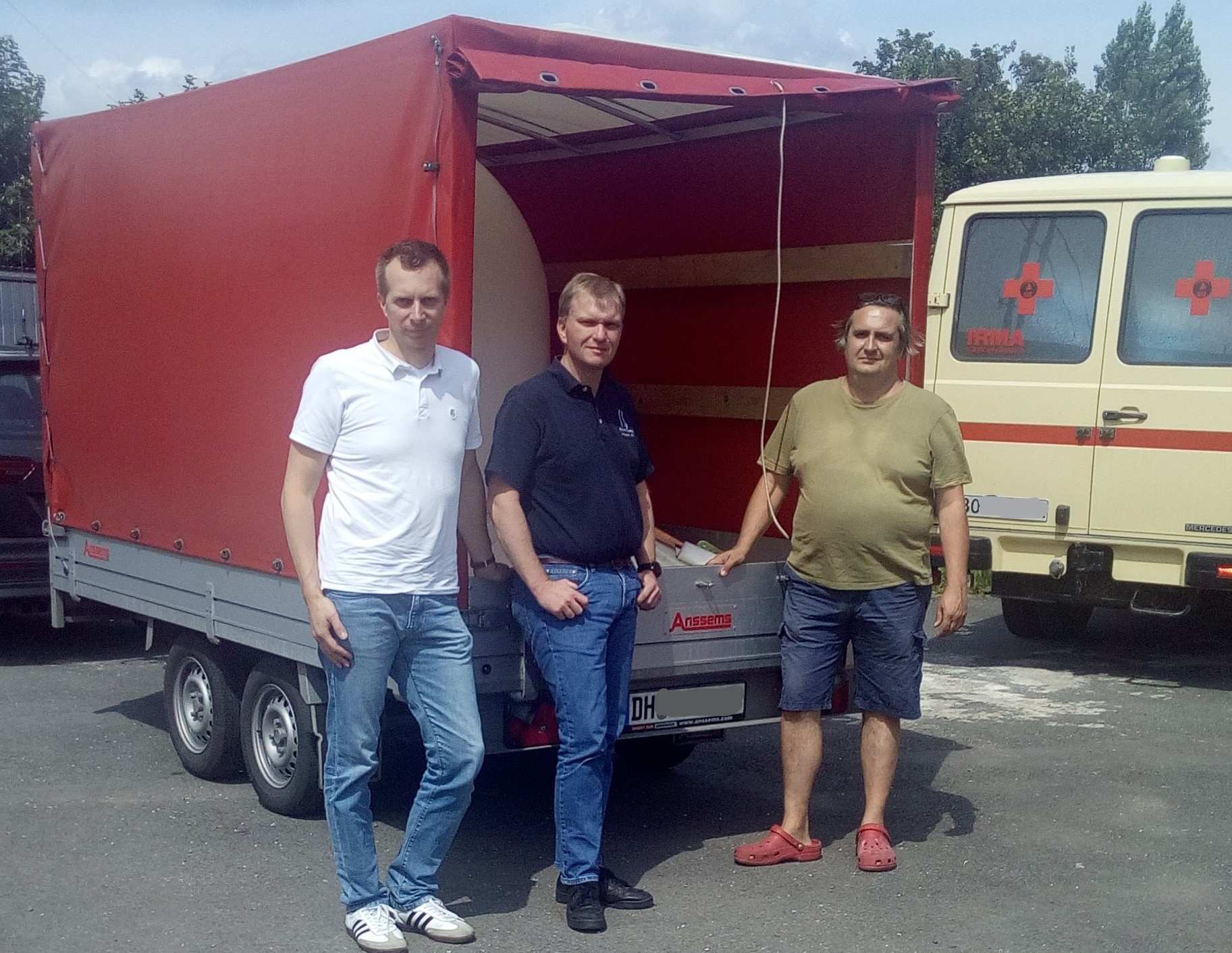 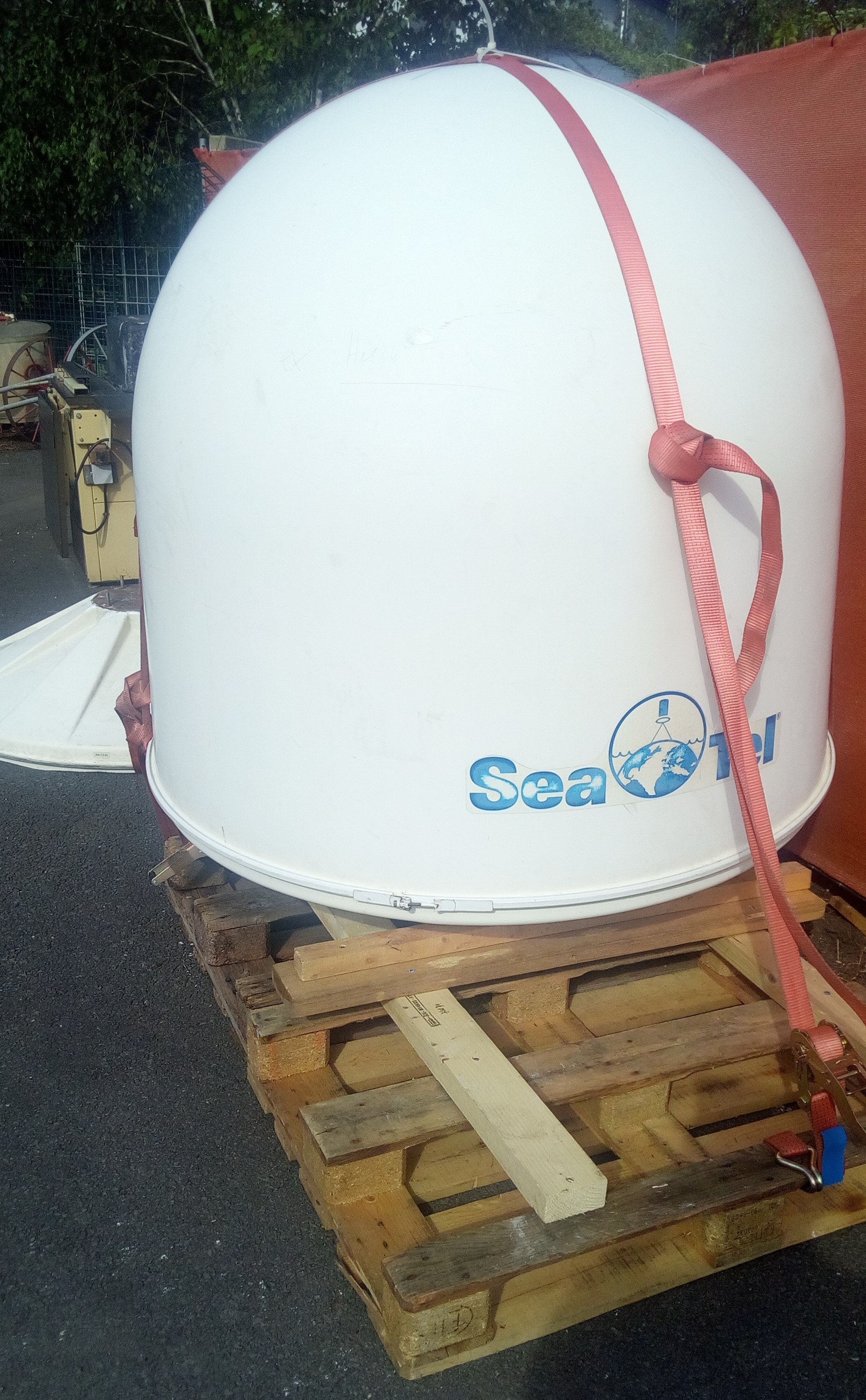 The antenna is a decommissioned Sea-Tel, as used on ships for the reception of satellite TV. The AZ/EL tracking and also the polarization (skew) of the feed is done automatically by means of complex actuators and electronics, which evaluate the received signal and keep the antenna at maximum. Of course, the movement of the ship and waves on the oceans must be compensated accordingly. The rotationally symmetric parabolic mirror has a diameter of 1.2m and an F/D of 375. The typical gain at 12 GHz is given as 41 dB.

Since we are installing the antenna stationary and need space for the dual-band feed, the next thing we will do is fix the antenna and remove everything that is not needed. 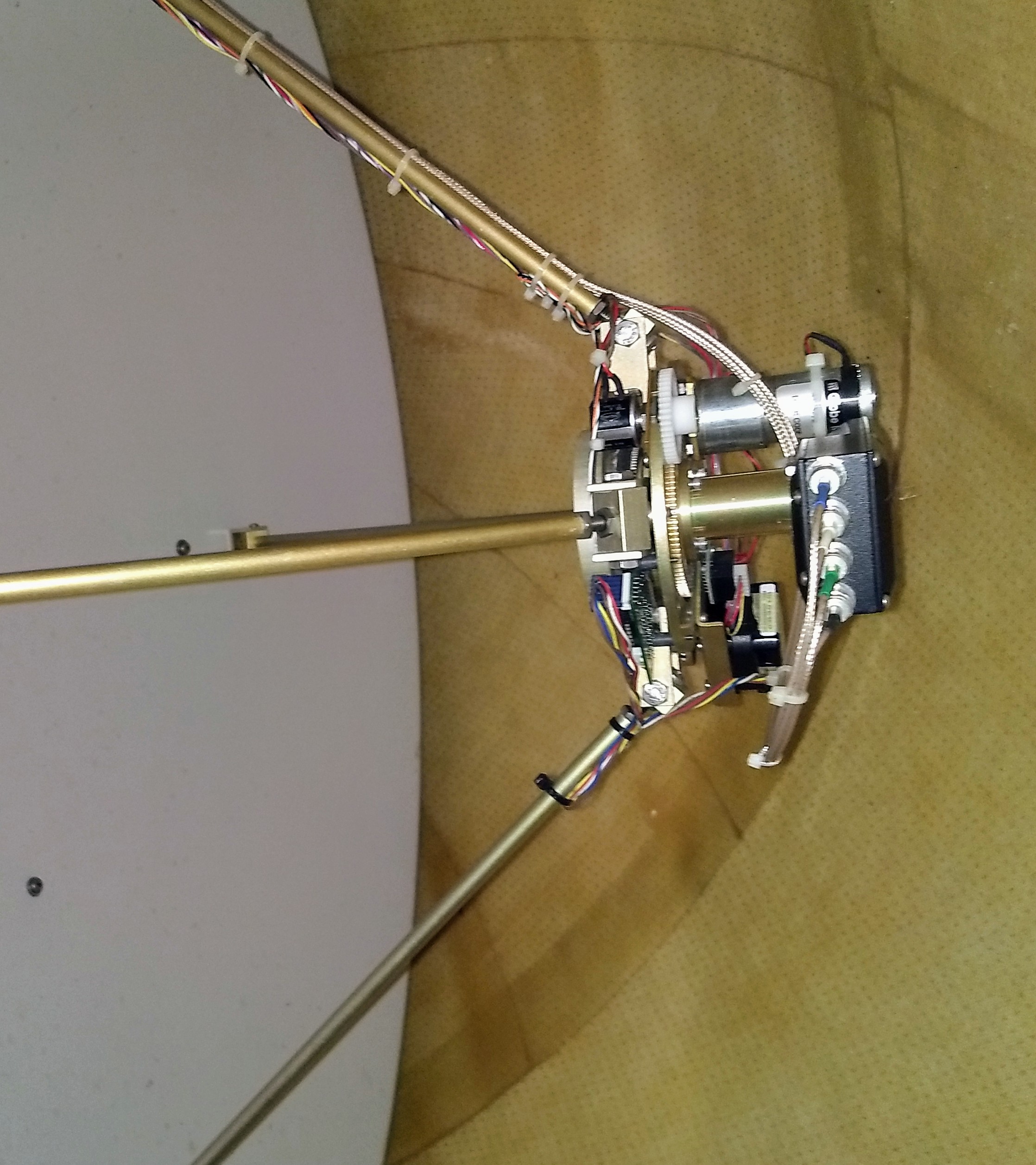 We have to completely remove the existing feed and the mechanics to compensate the skew (tilt). It might actually be a bit tight, but we hope a POTY (without dielectric lens) will fit if we flange an angled Opticum twin LNB directly. Alternatively the new dual band feed from Peter DJ7GP would work. We will probably test both, because we don’t want to give away any dB’s and also don’t want to blow energy into the air unnecessarily. 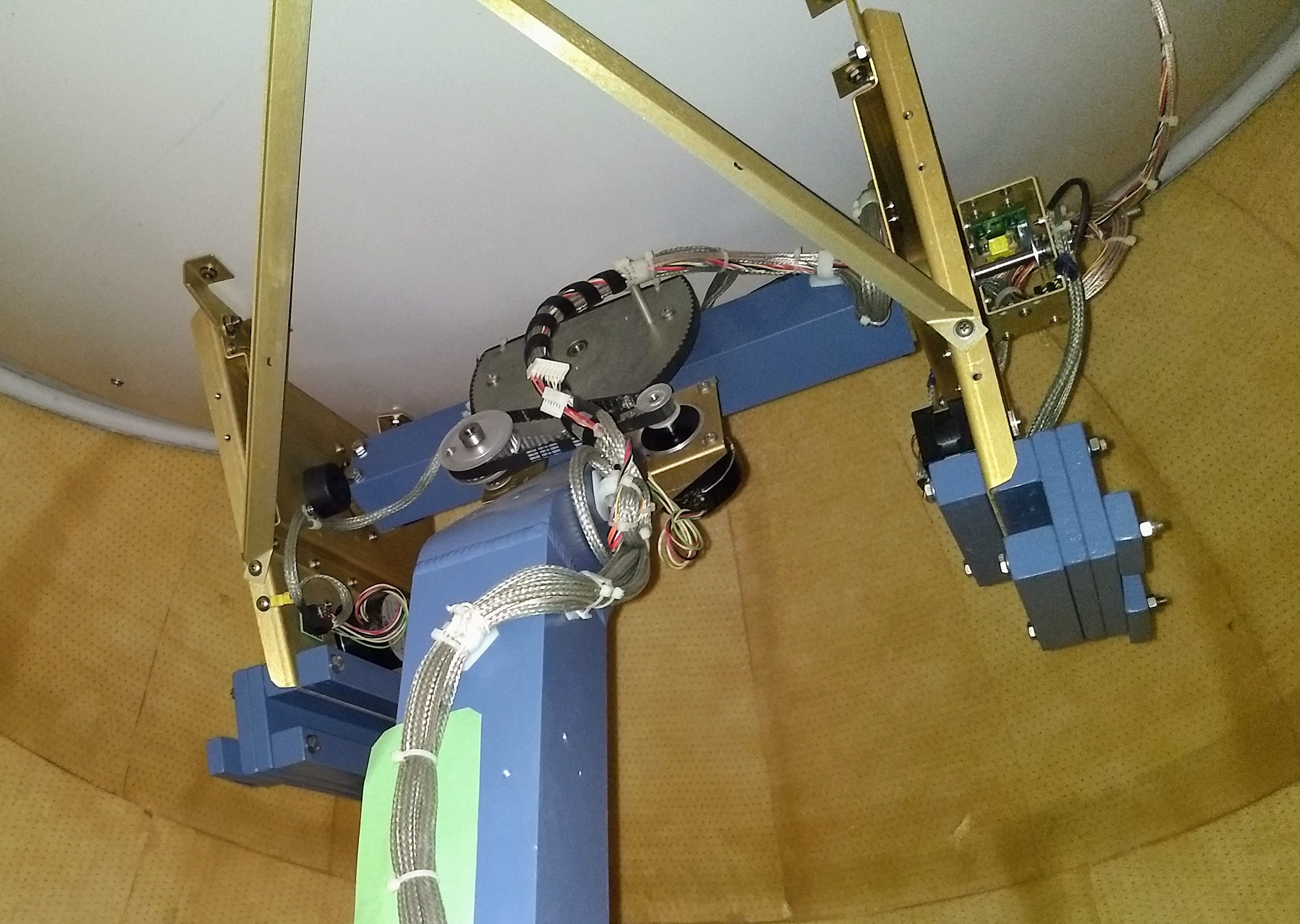 We also no longer need the AZ/EL control and will be setting and fixing it accordingly. Actually, it’s a pity, but for us the antenna dome (radome) and the antenna itself is crucial. 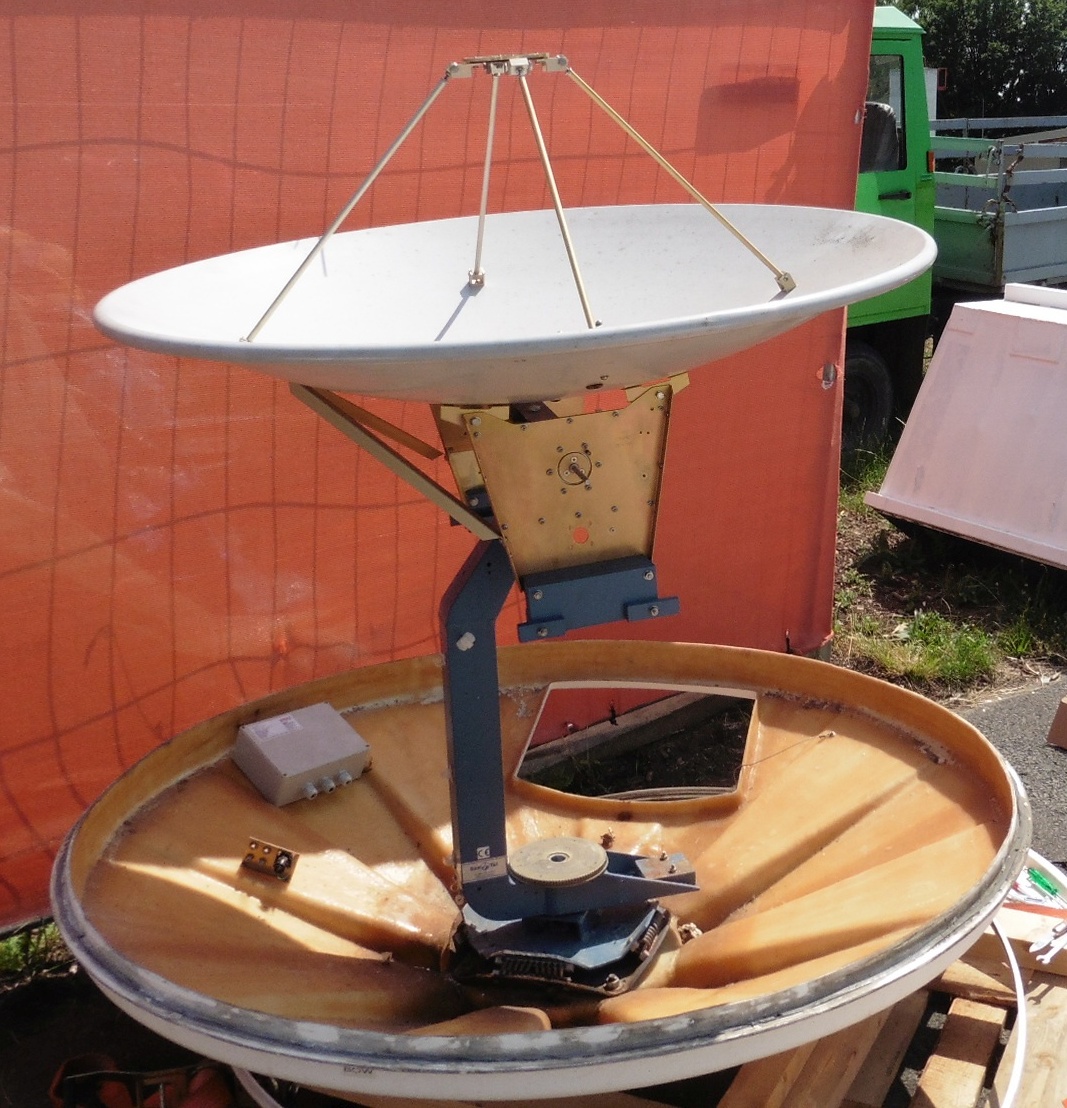 Special thanks to Heiner DD0KP and Matthias DD1US for assembling and measuring the POTY.

This should fit, behind the feed is a little more space than initially feared, so that there should be no space problems even with LNB. 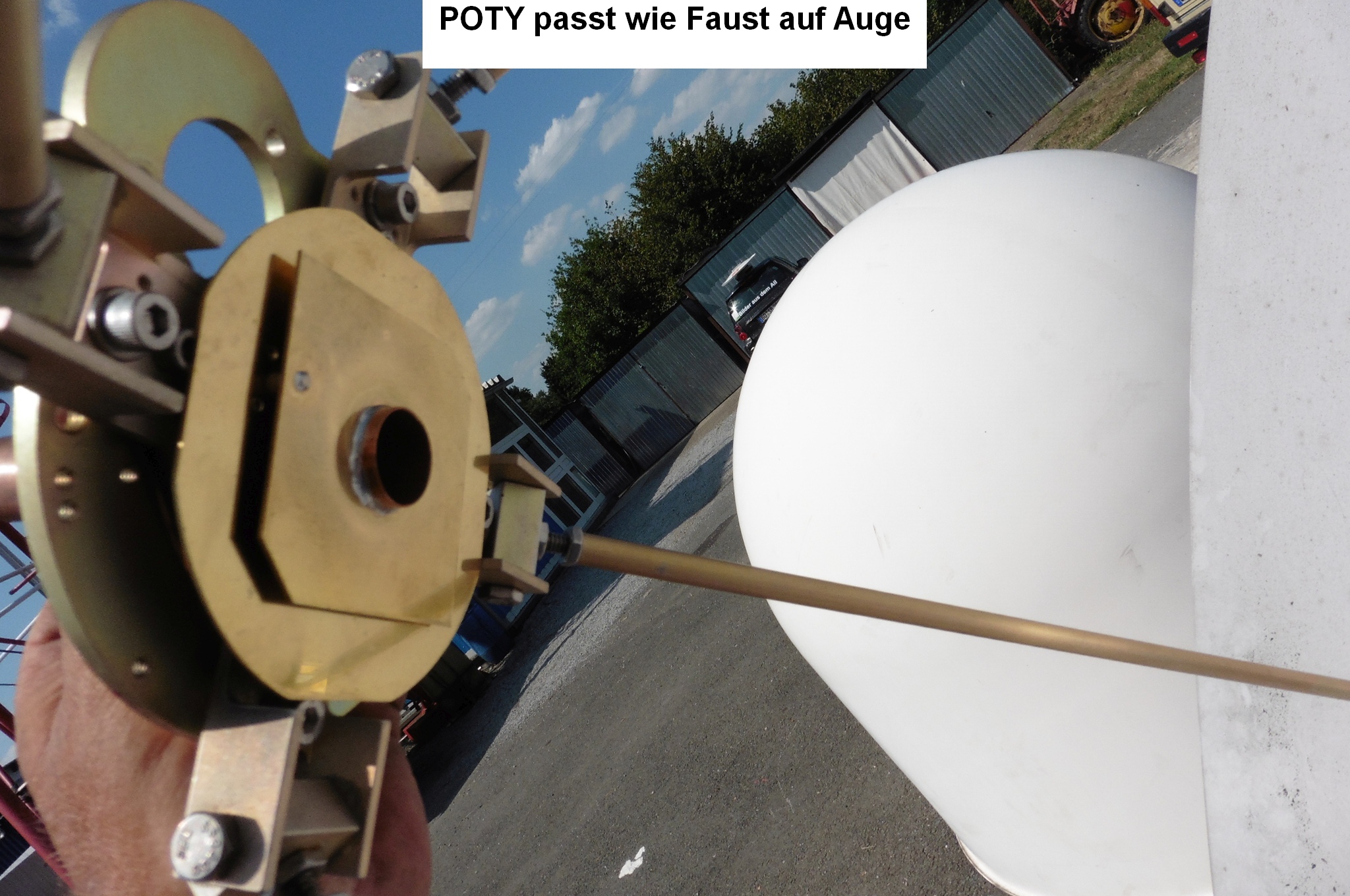 Also Peter DJ7GP and BaMaTech support us and will thankfully provide a dual band feed. Here already the new version with LNB will be used, because we need both polarizations because of NB and WB. 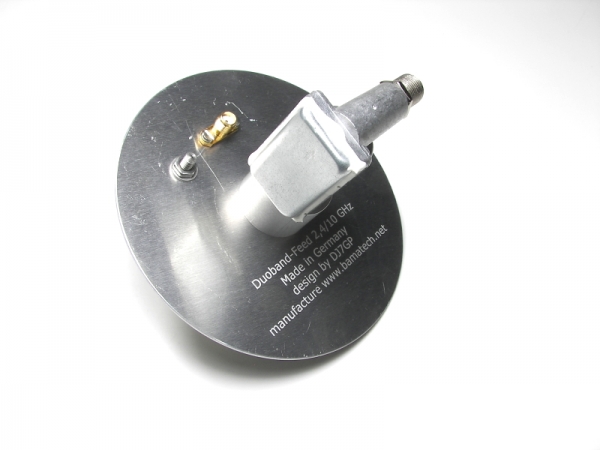 What are we planning?

Below the antenna there is a gallery in which a constant temperature between 10 and 20 degrees is always maintained. Power is also available, so we will place the DATV-capable power amplifier and a correspondingly strong power supply there to keep losses as low as possible. We will also install the AMSAT uplink and downlink converters here. The LNB will be fed with a reference clock directly from AMSAT’s new receiver converter and will therefore be very frequency stable and also frequency accurate. Then it continues with a maximum of 60m to the actual radio station. A satellite-compatible amateur radio transceiver is to be installed there for operation via the NB transponder. Maybe we will get a suitable sponsor! The DATV equipment will again be identical to the ground equipment at Es’hailSat and QARS in Qatar. For DATV reception, especially with reduced bandwidth below 1 MS/s, the BATC has provided a minitiouner free of charge.

Of course, everything must be operationally safe, because the radio amateurs on site must also familiarize themselves with the technology. We also hope to send pictures from a WebCAM live from Antarctica!

Construction and financing of the equipment is largely done from the association funds of AMSAT-DL and its members, membership fees, donations and sponsors. Also, a portion of the proceeds from the sale of the QO-100 kits for the receive and transmit converters goes to this project in accordance with the statutes. The board members and the project team are all volunteers!

There is still a lot of work to do and everything has to be 100% tested and on time in the end.

Whoever would like to support us actively and energetically in this project is of course very welcome! Especially supporters in the area of Bochum are wanted, who also want to lend a hand on site at the observatory Bochum. Get in touch with us!