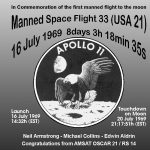 Into orbit with Russia

The first version of the RUDAK transponder flew on AMSAT OSCAR 13 in 1988, but could not do its job due to a component failure. With RUDAK-II a second phase followed, in which besides a pure repetition also the possibilities for substantial extensions were used.

RUDAK-II is the digital part of the amateur radio transponder RADIO-M1, the first one which was developed in German-Russian cooperation between AMSAT-U-ORBITA in Molodechno and AMSAT-DL after intensive contacts in 1989 and was launched after a launch delay of about 2 years. After launch the payload got the designation AMSAT-OSCAR-21 or RS-14.

The amateur radio payloads were as a guest on the Russian mother satellite “INFORMATOR-1”, which was launched as the first prototype for the Koskon “Global Space Communication System”. The operational Koskon system was to comprise 32 to 45 satellites of the INFORMATOR class with several satellites in different orbital planes. INFORMATOR-1 was commissioned by the Ministry of Geology (GEOS) to collect data from various scientific stations and transmit them to the ground station near Moscow and Omsk. About 1 kW of electrical power was available from the two solar generators and the operational life was stated to be more than 5 years. Due to the lower orbit of 1000 km several contact windows of up to 25 minutes duration were possible.

The additional RTX2000 Reduced Instruction Set Computer (RISC) was used to break new technological ground. The architecture of this computer consists of structures which provide basic functions of the IPS programming language developed by AMSAT-DL in an ideal way in hardware. As a result, this additional processor was many times faster than that of RUDAK-I and could be used for various transmission methods using digital signal processing (DSP software).

AO-21 was a real all-rounder, besides digital modes with data rates up to 9600 baud, FSK, BPSK and for the first time RSM (Rectangle Spectrum Modulation), not only simple AX.25 mailbox operation for Store&Forward was possible, but also FAX images according to the WEFAX standard were broadcast. RTTY and SSTV were also possible. Furthermore, the transmitter could be analog modulated in FM by the DSP-RISC processor, e.g. by digitized speech or as an FM transponder. Initially intended more as a test function, the FM transponder was also very well received and used intensively. Also regular FAX and FM transmissions on special occasions found a large positive echo, no matter whether this was in honour of the Apolllo 11 crew at the 25th anniversary of the first moon landing or as to Christmas a Christmas melody sounded. Due to the high output power AO-21 was also very good and easy to receive worldwide with handheld radios.

After a successful operating period of 3 ½ years, AMSAT OSCAR-21 (RS-14), unfortunately and suddenly, fell silent on 12 October 1994. For financial reasons, the command operation of the main satellite “INFORMATOR-1”, which had completed its primary mission, was completely discontinued. On 16 September the command station had already switched off all on-board systems, including active temperature and attitude control. Only the operational supply for AO-21/RS-14 remained switched on. In addition, the command system of the mother satellite was permanently deactivated. Without constant intervention of the INFORMATOR-1 ground station the mother satellite got out of control relatively fast, so that finally the power supply failed. AO-21 was never heard again since then.
Nevertheless, with RUDAK-II a payload was created which gave many impulses to amateur radio and all technological components of RUDAK-II were of great importance as forerunners for the design of future satellite projects.
In addition to the technological success, the political and human success of the joint Russian-German project was also remarkable. Due to the many changes in the former USSR, the planned Koskon satellite constellation was abandoned for financial reasons. Due to the excellent cooperation of all participants, there would certainly have been room for further amateur radio payloads.

The Space Flight Control Centre in Golitsino-2 near Moscow has informed the AMSAT-R Group that since September 16, 1994 the command radio line of INFORMATOR-1 is to be switched off and the ground control system of the regimes of the on-board equipment finishes its functioning.

Several other space objects that are of non-profitable character but that create only a headache for the Military Department have the same destiny. Thus, the financial difficulties of the Defense Ministry have influenced in their turn the radio amateurs.

Previously there was an agreement between AMSAT-R and Golitsino-2 according to which the control of the satellite was done by the jointly worked out program.

INFORMATOR-1 – an experimental artificial Earth satellite made by the production amalgamation “POLYOT” by the order of the Ministry of Geology according to routine technology similar to those satellites that launched RS3-8, RS10/11, RS12/13, COSPAS and many others. The geologists could not find a professional organization to make the transponder fit to their requirements and the question has not been settled until the radioamateur group AMSAT-U-ORBITA (Molodechno, Byelorus) took the responsibility. As a payment for their work the geologists have agreed to install the radioamateur equipment on board the satellite.

The design of the radioamateur equipment consisted of two sets of linear transponders of Mode B (70 cm uplink, 2 m downlink), CW, packet telemetry and the command radioline equipment, the secondary power supplies.

At the same time since the spring of 1989 by the initiative of the German side the “secret” talks between the RUDAK AMSAT-DL group and the Moscow AMSAT group have been carried out without telling the leadership of DOSAAF about a joint project of a radioamateur satellite with the use of the most advanced methods of digital signal processing.

A similar system called RUDAK-1 was worked out and installed in OSCAR-13 satellite but it did not operate because of the technical defects.

This idea has found a good response at the AMSAT-U-ORBITA designers. The preliminary minutes on the joint project were signed during AMSAT-UK Colloquium at the University of Surrey in August 1989. Their final version was agreed and singed in the autumn of the same year when the considerable part of the equipment has already been made.

According to the minutes AMSAT-U-ORBITA is to work out and make the linear transponder, receiver, transmitter, command link, telemetry, secondary power supplies and to settle with the authorities all the questions concerning the installation of the equipment and the launch of the satellite to the orbit.

RUDAK AMSAT-DL group is working out and making the digital part called RUDAK-2 which includes a digital transponder, AX25 mailbox and its own command link. The equipment has large possibilities for various experiments that finally made the satellite one of the most popular radioamateur satellites and gave the opportunity to make a series of important experiments of testing new ideas for the “satellite of the century” Phase-3-D.

The Space Flight Control Center in Golitsino-2 made the general control of the on-board systems. Some of the life important commands of the radioamateur equipment were also duplicated there. 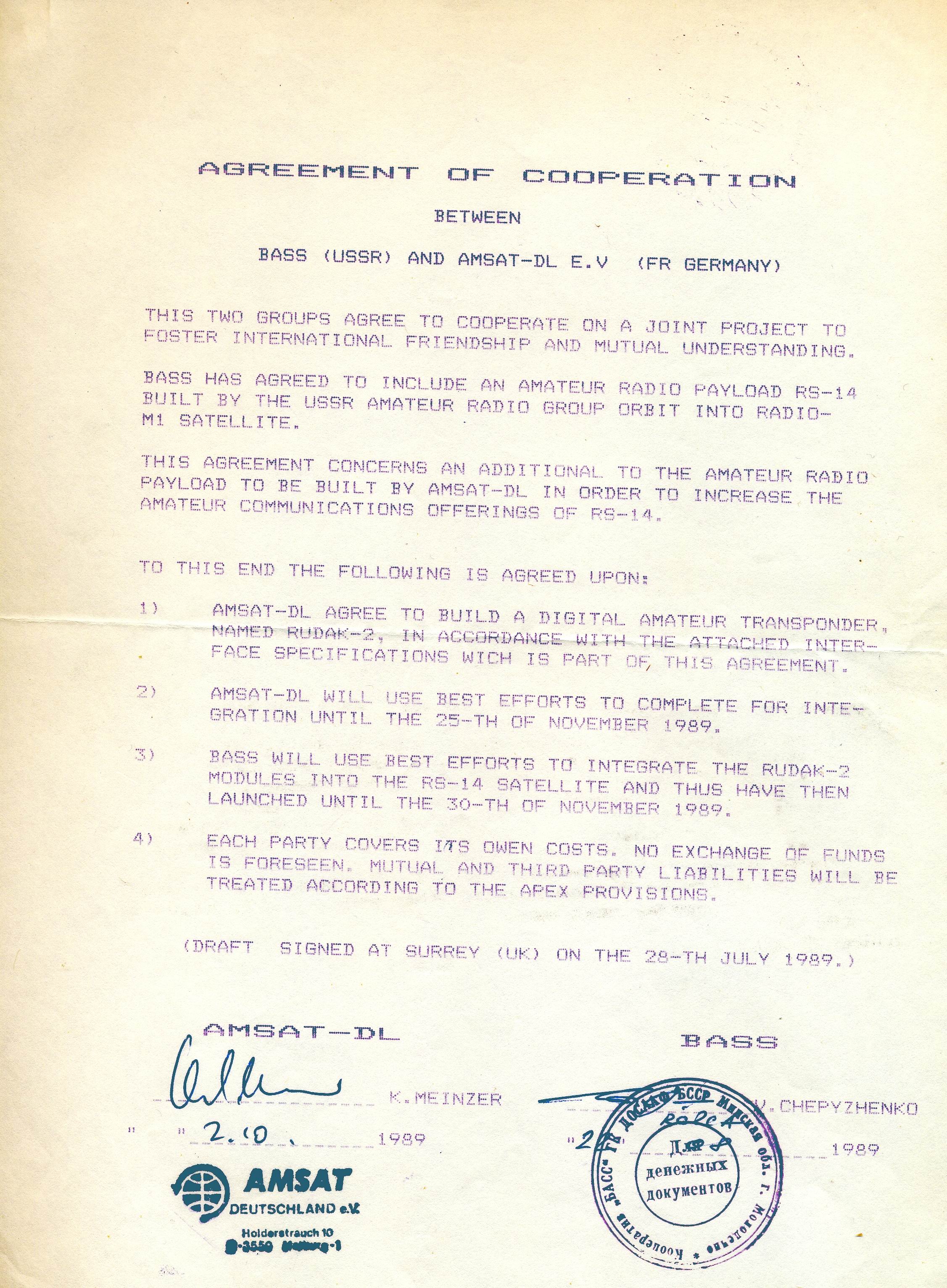 Here I would like to sing the praises of the packet communications. In those years (1989) the facsimile communications, the means of copying, the “non-sanctioned” telephone talks with the foreign colleagues have been strictly prohibited in this country, there were also much difficulties with the use of the e-mail. The radioamateurs of the USSR have not yet lived up to that day when it was permitted for them to use the packet communications. But to coordinate all technical questions, to solve hundreds of schematic and construction problems, to coordinate the actions of the sides were possible only by means of regular, almost daily, intercourse with the people involved. And such a means was finally found between DB20S and UA3CR. That was the packet communications under the disguise of the third countries (the socialist countries). With the help of the packet exchange not only texts but also drawings have been sent. In short, if there were no packet communications there would be no the satellite AO21/RS14.

At first the launch was scheduled for the beginning of 1990. There was too little time left and only the radioamateurs enthusiasm let finish the fantastic amount of work in time. Our German friends even had to postpone the Christmas for further time… 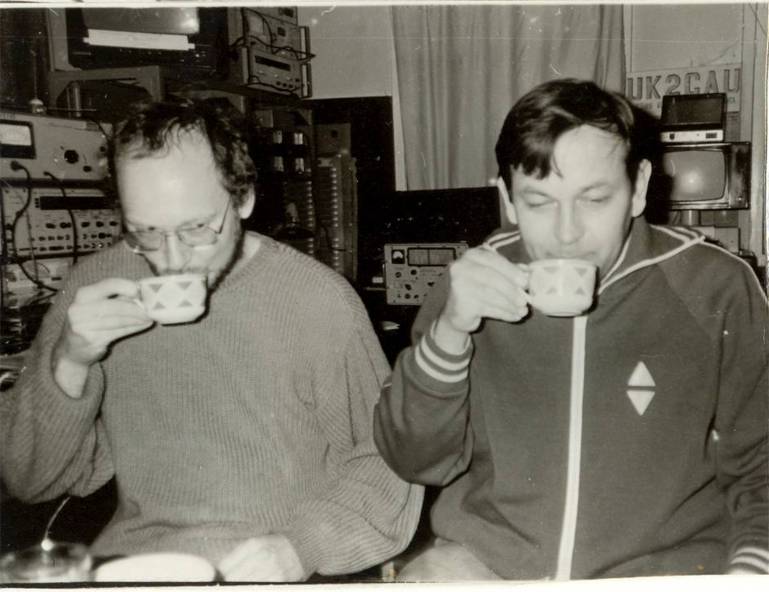 The equipment RUDAK-2 was delivered first to Moscow then to Molodechno. The designers of the AMSAT-U-ORBITA group headed by V. Chepyzhenko (RC2CA), L. Maksakov (RA3AT) and L. Labutin (UA3CR) of the Moscow AMSAT group and S.Eckart (DL2MDL) of AMSAT-DL took part in the adjustment and complex testing of the equipment in Molodechno.

But as it often happens in space mazes after the equipment was sent to the PA “POLYOT” it appeared that the production of a non-radioamateur equipment was delayed and thus the launch of the satellite had to be postponed for an indefinite period of time.

On the 29-th of January 1991 the first international satellite created in cooperation with the Soviet and German radioamateurs was successfully launched to the orbit from the Northern space launching site of Plesetsk. 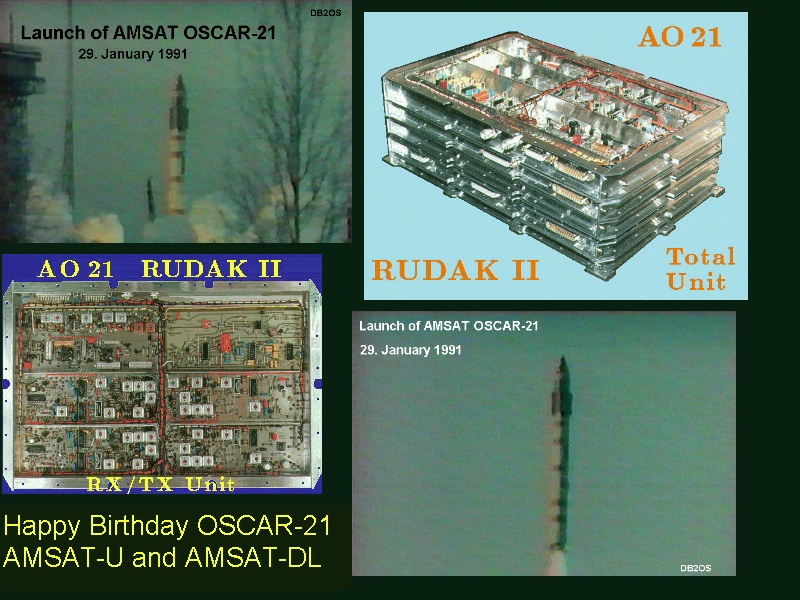 After launching to the orbit it was given the name of AMSAT-OSCAR 21 in commemoration that it was created by the radioamateurs of different countries. We have experienced many dramatic moments. But all that was to the good. And not only from the technical point of view. May be the most important result of it was the establishing of durable international contacts between the enthusiasts of satellite communications of Russia and many other countries.

The AMSAT-groups are continuing their cooperation.