On December 29, 2021, our new QO-100 SatCom ground station antenna for DP0GVN arrived intact in Antarctica at Neumayer Station III, and as of January 9, 2022, DP0GVN is again reachable via QO-100. This should continue to ensure future radio operations for the upcoming 2022/2023 wintering crew after the old antenna was rendered unusable by an exceptionally strong storm in August 2021. 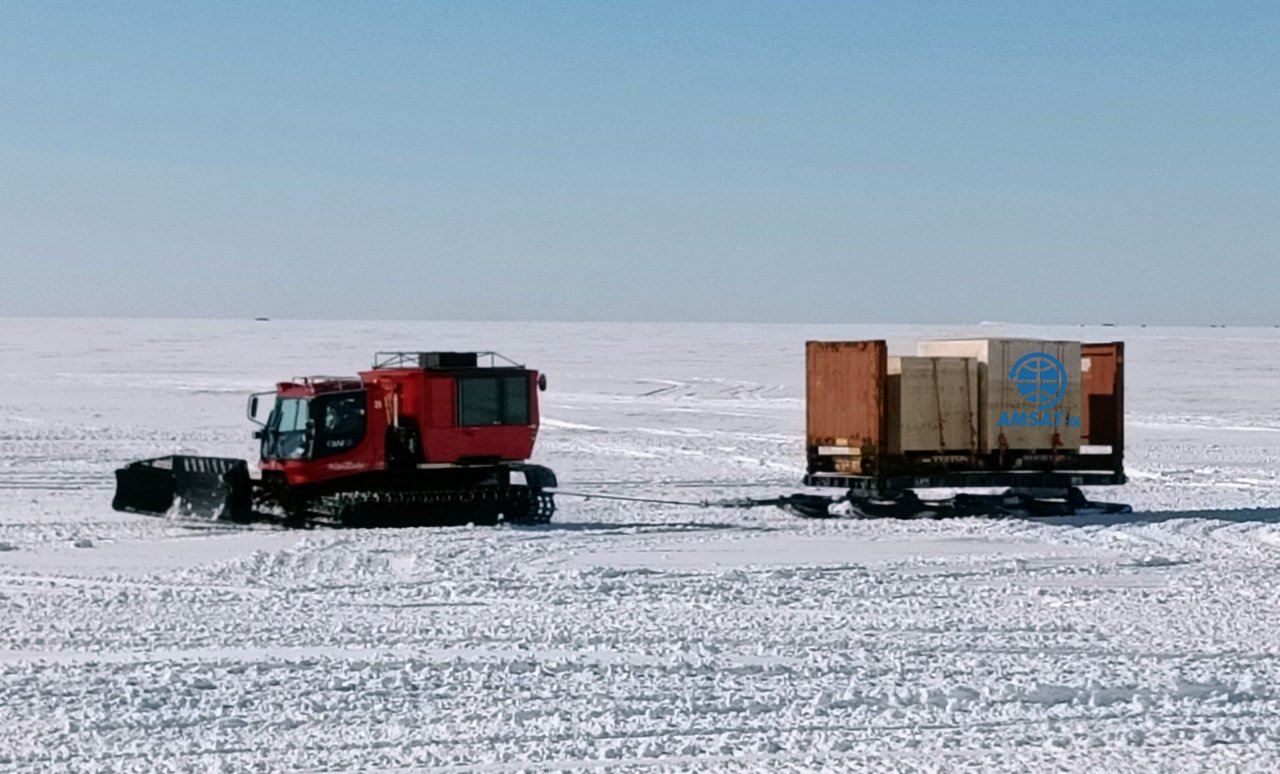 Since the 2019/2020 and 2020/2021 over-wintering team, radio contacts with Antarctica via the first amateur geostationary radio satellite Qatar-OSCAR 100 / QO-100 (Es’hail-2) enjoy the greatest popularity. AMSAT-DL provided the appropriate radio equipment for DP0GVN at Neumayer Station III, covering all costs for setup and provision of the required radio equipment and antenna.

We would like to take this opportunity to thank our members and friends of AMSAT who have made this possible through their membership fees and donations. Also, this would not have been possible without our team of volunteers. Please continue to support our charitable work through your membership or donations.

While amateur radio operations mostly take place during free time, contacts with schools have also been arranged on a regular basis. Similar to ARISS (Amateur Radio on the International Space Station), such contacts in Antarctica are also something very special for the students. This will certainly also arouse interest in scientific or technical professions and, last but not least, amateur radio.

During the night of 13/14 August 2021, one of the strongest storms at Neumayer Station III measured average wind speeds of 176 km/h and even more than 207 km/h at peak. This did not remain without consequences and so among other things the satellite antenna for QO-100 was damaged so strongly that with it no more radio operation was possible. DP0GVN via QO-100 so unfortunately QRT until further notice.

AMSAT-DL therefore decided at short notice to build a new antenna and to deliver it in less than 2 months construction time in the middle of October for the ship transport to Antarctica. The antenna has now arrived there safely and was immediately transported from the ship at the ice edge to Neumayer Station III. 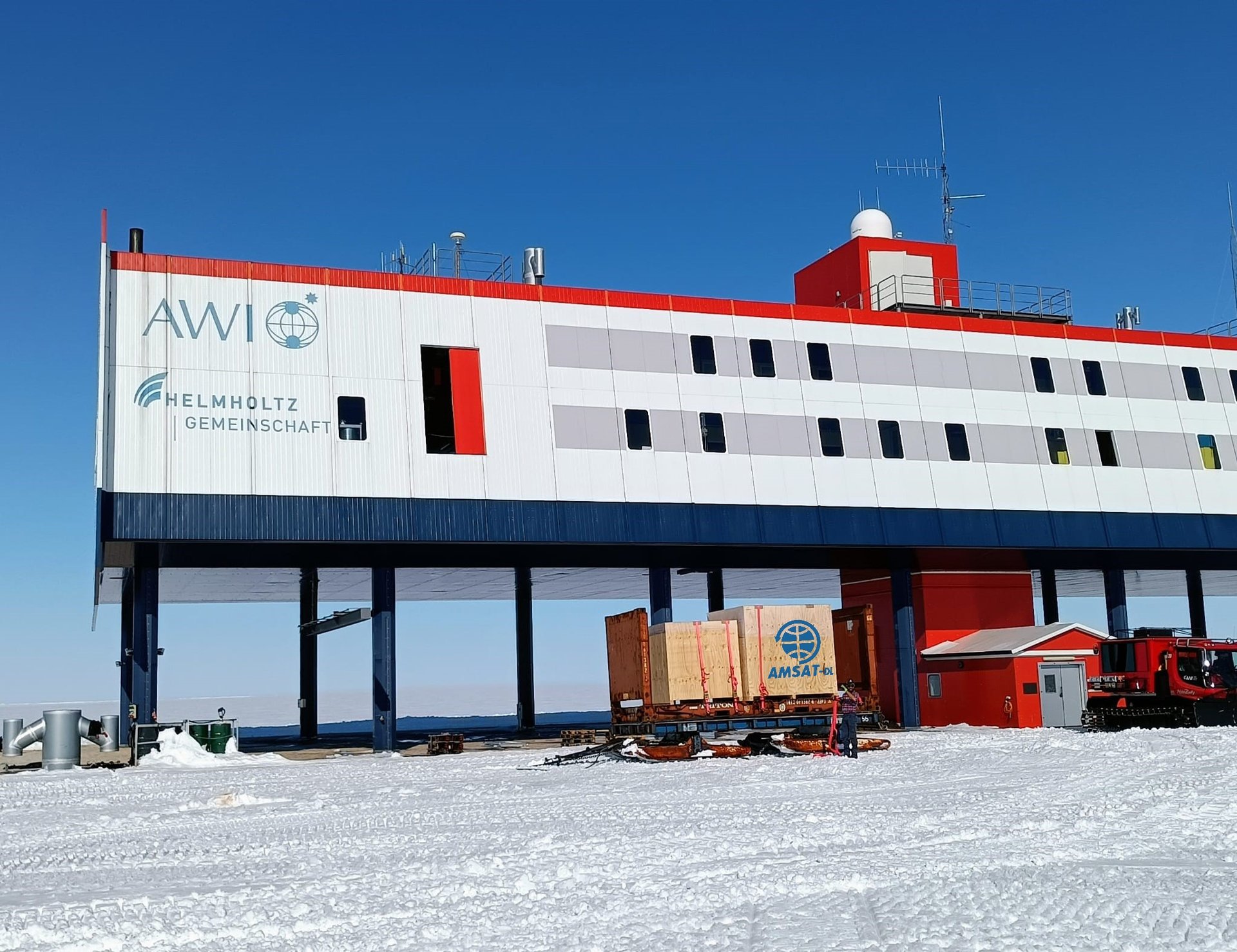 Antenna on the roof

Finally, on January 5, 2022, the new replacement antenna for QO-100 was hoisted by crane to the roof of the station in good weather and permanently installed. Another antenna for receiving weather satellites was also installed, so the opportunity was favorable. 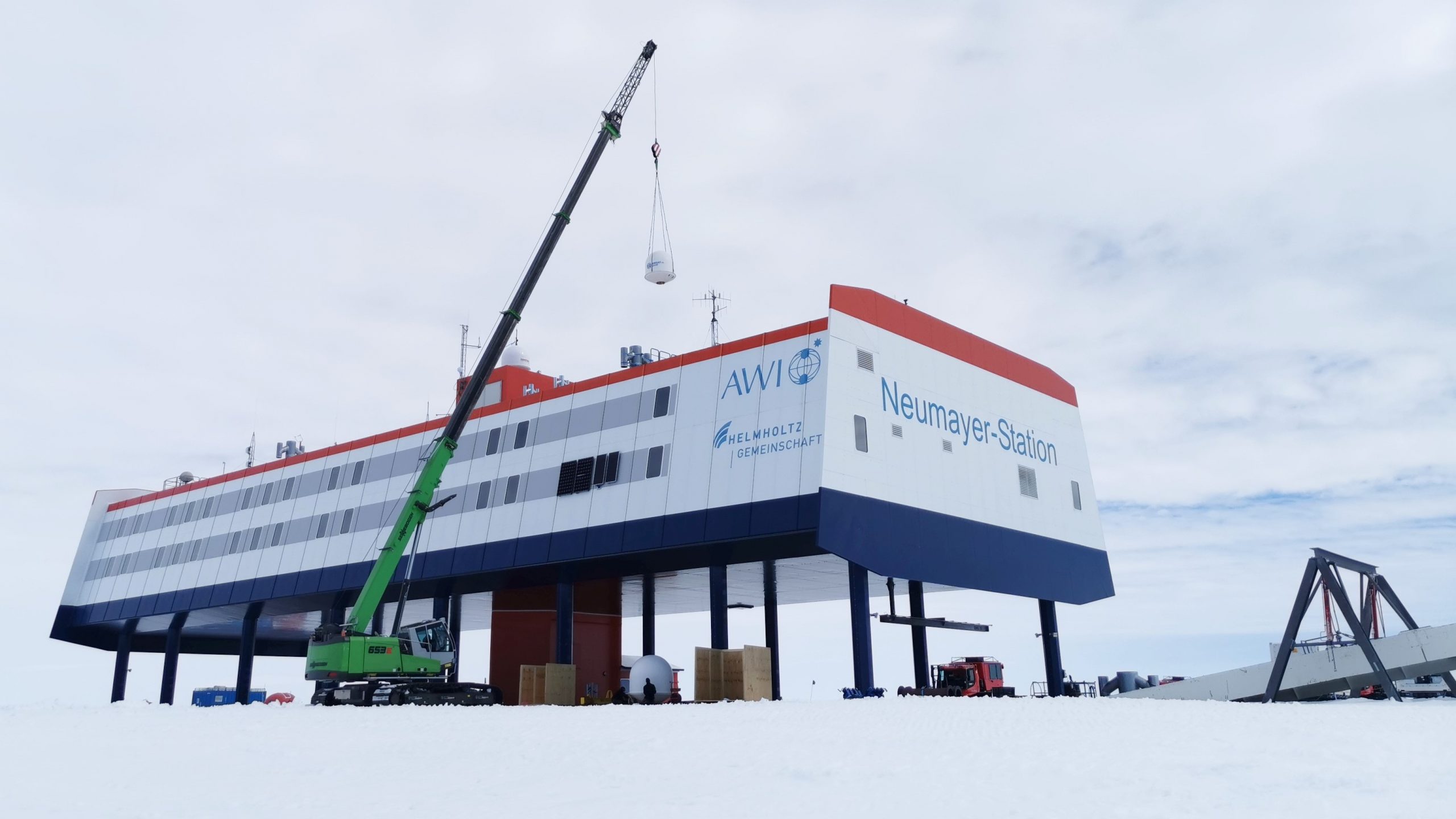 The brand new crane in action, on the short rope the new QO-100 for DP0GVN. Thanks to a great and highly motivated team, everything went off without a hitch and even the weather played along well. 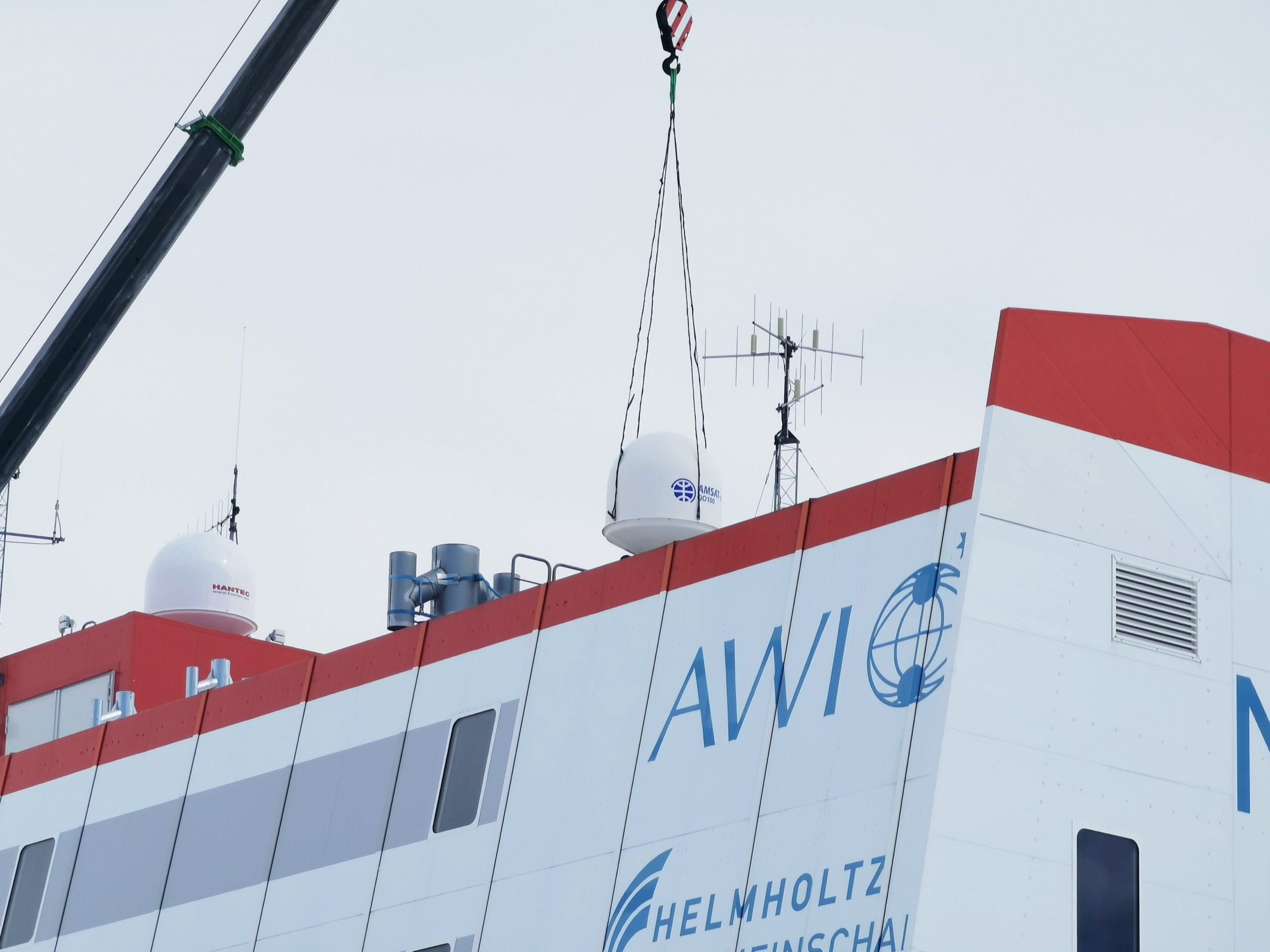 Once the antenna was securely fastened, the cables for uplink and downlink were also re-routed. The transverter is located directly under the roof, there are almost 14m of cable. From there, it’s another very long stretch to the radio room. Since the transverter is only accessible via scaffolding, all work must be well planned.

Even in Antarctica weekends are not taboo and despite an enormous work program Felix DL5XL, Theresa DC1TH and team could continue to take care of the antenna and connect everything. At first there was confusion because there was no noise rise and also no signal from the satellite. It quickly turned out that when plugging in the cables from the LNB, the protection circuit of the power supply had responded. After the transverter was switched off and on again, a noise increase of about 25dB was suddenly observed at the output of the transverter. After a first rough alignment of the dish, the first signals were finally received on the NB transponder. After short fine alignment also the transponder noise was visible and the DATV beacon could be received with a MER of 7dB. In the next few days, Felix wants to use the beacon to optimize the dish alignment. In Bochum, during our acceptance tests, we had still measured about 9.8dB MER of the DATV beacon with a largely empty WB transponder, but without a radome. However, due to the low elevation in Antarctica, with a longer path through the atmosphere and further possible losses at the edge of the footprint, one will have to cut back. However, the 7dB corresponds to the reception power of the old antenna. However, further fine-tuning based on the DATV beacon may help a bit.

You can’t hide for long on the QO-100 satellite and the first test connection in CW didn’t stay hidden for long.

A little later operator Felix, DL5XL switched to SSB and the pileup on the transponder was not long in coming! If you are wondering about the wide frequency band, Felix likes to do split operation. So he does not hear on his own frequency, but a few kilohertz above. So there is no point in broadcasting on his frequency, he will not hear there and the frequency should be kept clear. Those who now have full duplex capability – as recommended in the QO-100 band plan – can once again significantly increase their chances of making fast contact. 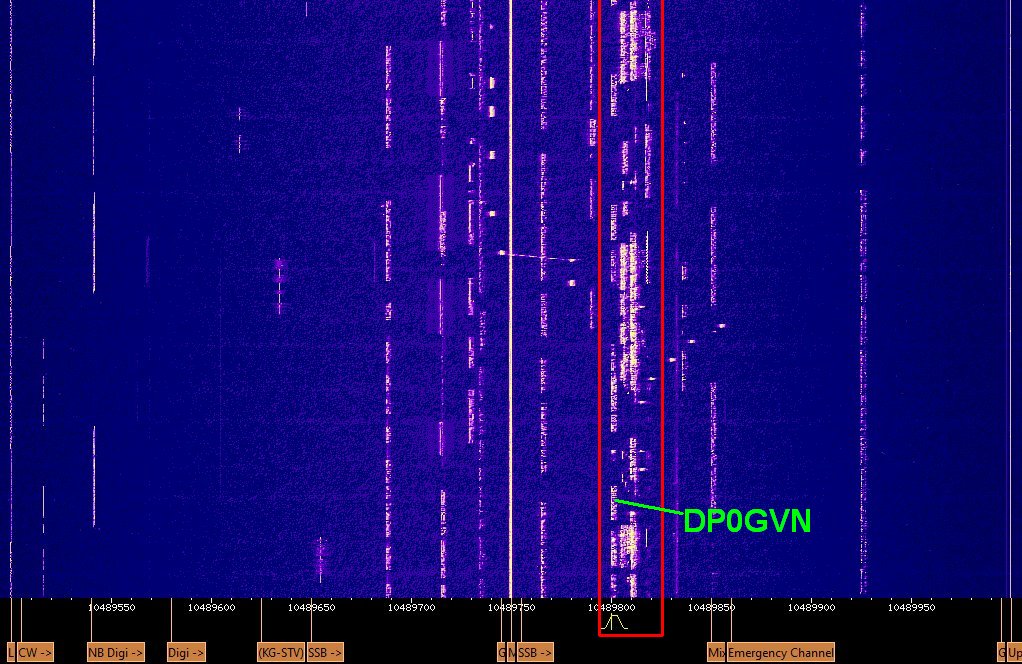 Theresa DC1TH and Felix DL5XL still have an enormous work program ahead of them before both will start their journey home in mid-February. But the new operator for the 2022/2023 wintering, Karsten DM2KX (ex-DO8KX), is already on his way to Antarctica to Neumayer Station III. So there will still be plenty of opportunities for radio contacts to Antarctica in the coming weeks and months, and so far the New Year 2022 is off to a really great start!