On October 10, 2022 at 12:00 UTC, the new QO-100 station was officially commissioned aboard the research vessel Polarstern in an opening ceremony. Andreas DL3LRM, operator of DP0POL/mm and Peter DB2OS at station DK0SB of AMSAT-DL and Observatory Bochum, performed the initial connection. After that, the satellite station is permanently available for general radio calls via QO-100, of course only as long as the free time of the radio amateurs on the ship allows it. 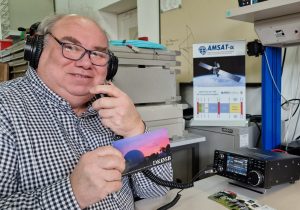 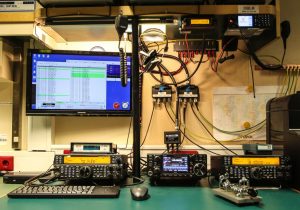 A special feature of the QO-100 station on board Polarstern is the fully automatically tracked satellite antenna under the radome, which has to withstand even the most adverse weather conditions and enables a secure connection to the geostationary amateur radio satellite even in heavy seas. 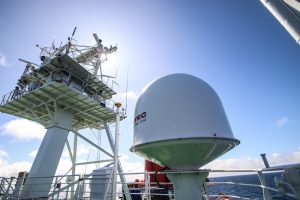 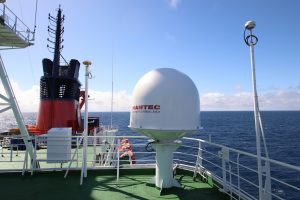 In line with our motto “Satellites for communication, science and education”, we as AMSAT want to contribute to Polarstern’s research mission for environmental and climate protection, especially in the context of regular school contacts. This allows students to learn about these important topics for the future first hand, as is already regularly practiced with Neumayer Station III and DP0GVN.

All of this would not have been possible without a major work effort by everyone involved and friends of AMSAT. AMSAT-DL financed this project from its own funds. We will report in detail on the construction and technical details in the next AMSAT-DL Journal.

Polarstern, sometimes referred to as FS Polarstern (research vessel), is a research and supply vessel designed as a German ARC3 icebreaker. It is used for research in the polar oceans and to supply the permanently manned research facilities Koldewey Station in the Arctic and Neumayer Station in the Antarctic. It is operated by the Alfred Wegener Institute for Polar and Marine Research (AWI) in Bremerhaven and continues the tradition of the Gauss Expedition, which was initiated with the first German Gauss South Polar Expedition from 1901 to 1903.