Of all leisure activities, only licensed radio amateurs have the valuable privilege of experimental use of frequencies.

In addition to its rights to use frequency bands, the amateur radio service also has the privilege and obligation (for “self regulation”) to independently design the intended use of the allocated areas with radio applications (operating modes and band plans). This also includes the coordination of radio operation facilities such as beacons, relays and satellites.

AMSAT is indeed not in a position to play “Police”, we can only give recommendations and advice.

However, every radio amateur should be encouraged to help and advice others lacking technical experience. This should indeed be done in a friendly manner, not as a sheriff.

This document is being used as a guideline for the first AMSAT P4-A transponder on Qatar-OSCAR 100 (QO-100, Es’hail-2), the first geostationary amateur radio transponder. It will enable potential users to be informed about the plans and operating procedures that should be adopted. This document might be updated regularly to take into account the operational experience. 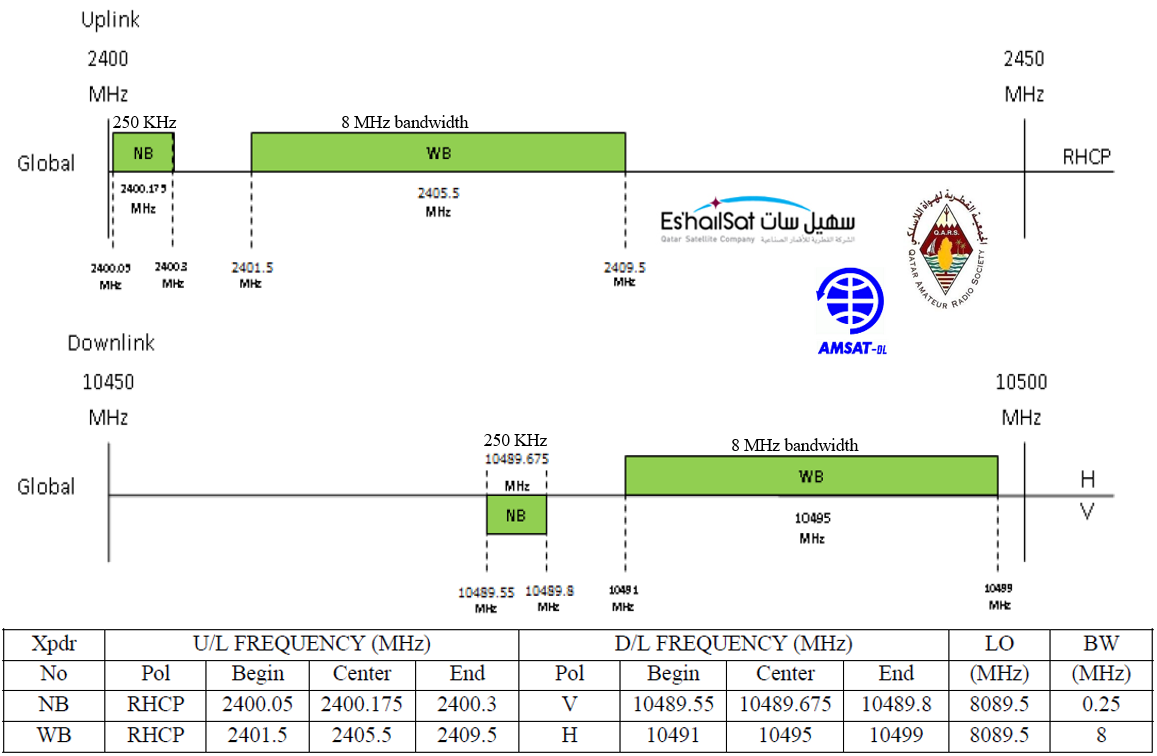 This chart shows the two transponders, their passbands and uplink and downlink polarisations. Note that, unlike the linear transponders on most other amateur satellites, these transponders are not inverting.

The two amateur band transponders on Es’hail-2 are a hosted payload being provided by the Qatar Satellite Company – Es’hailSat and the Qatar Amateur Radio Society (QARS) in co-operation with AMSAT-DL. It is vital that operators respect this facility and refrain from any activity that might cause offense, or which is outside the terms of their amateur radio licence.

The narrowband transponder is intended for conventional analogue and narrowband digital signals with maximun 2.7 kHz bandwidth.

No transmissions should be made beyond the nominal edges of the transponder passbands. In particular, no operation should take place below the lower beacon nor above the upper beacon (now also called experimental beacon).

No uplinks should result in downlink signals that are stronger than these beacons. In the event that such signals are detected, they will be marked by a “LEILA” siren. When they have been marked by “LEILA”, operators should immediately reduce their uplink power (ERP).

No FM transmissions should be made to Es’hail-2 as these would use excessive power and bandwidth.

On February 14th the NB Transponder Bandplan was extended according to the following graphics. 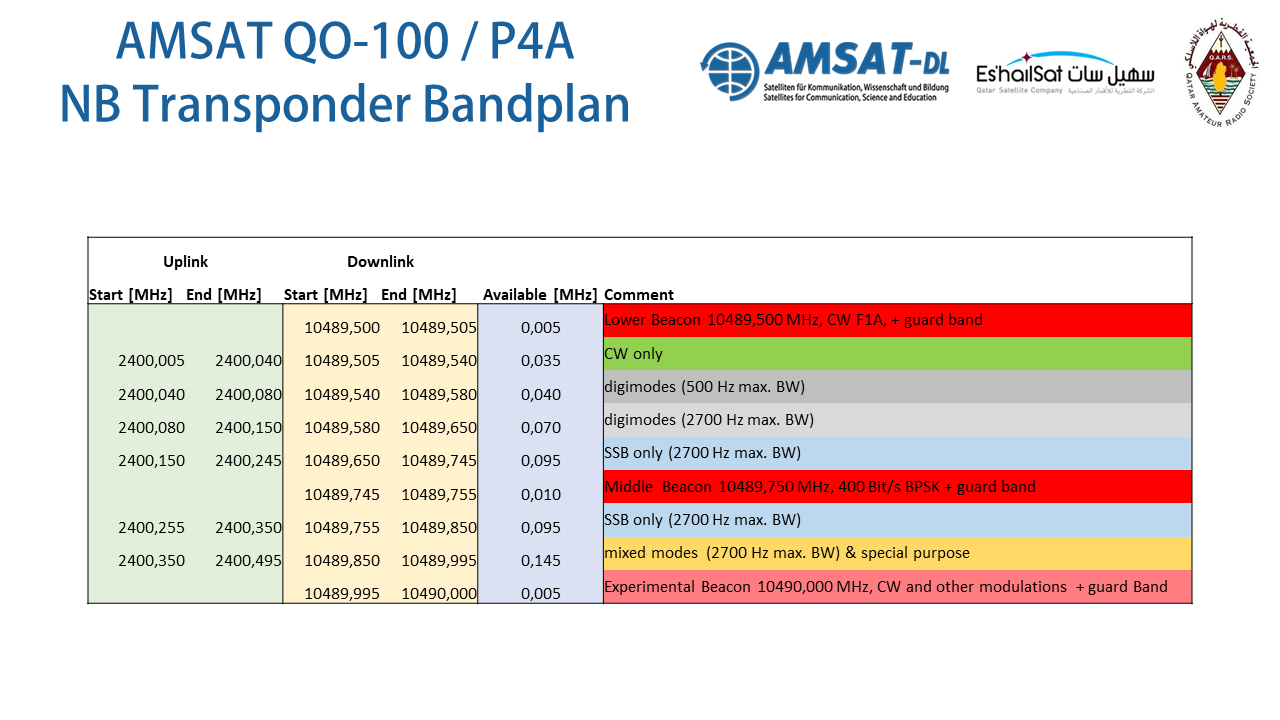 Remote operation of an amateur radio station via QO-100 is only permitted if the station belongs to the operator himself and is operated at his own location. He must always have full control over the station and in particular be able to switch it off immediately if, for example, interference occurs. Special cases of unmanned and automatically operating stations require both permission from the operator of the space station, in this case represented by AMSAT-DL, and special permission from the regulatory authority responsible in the respective country. The international and national legal regulations must always be complied with by the operator. The above agreement is in accordance with AMSAT-DL, AMSAT-UK, QARS and Es’hailSat.

Remote operation used by groups (private or club stations, gateway traffic) is not wanted by the satellite operator.

This map shows the coverage expected using the global beams on the spacecraft. For broadcast satellites it is usual to show the coverage down to 5 degrees elevation, but it is expected that well sited locations may provide access beyond that shown. The actual limits and power/dish sizes required will not be known until after commissioning. 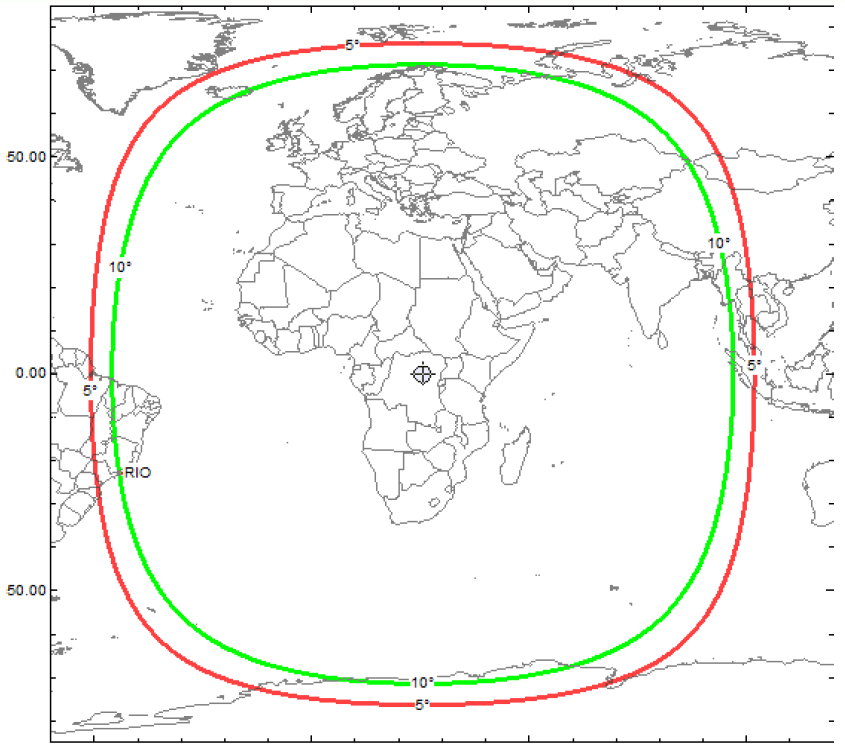 Here is another map shopwing the maximum possible visibility area at 0° elevation angle: 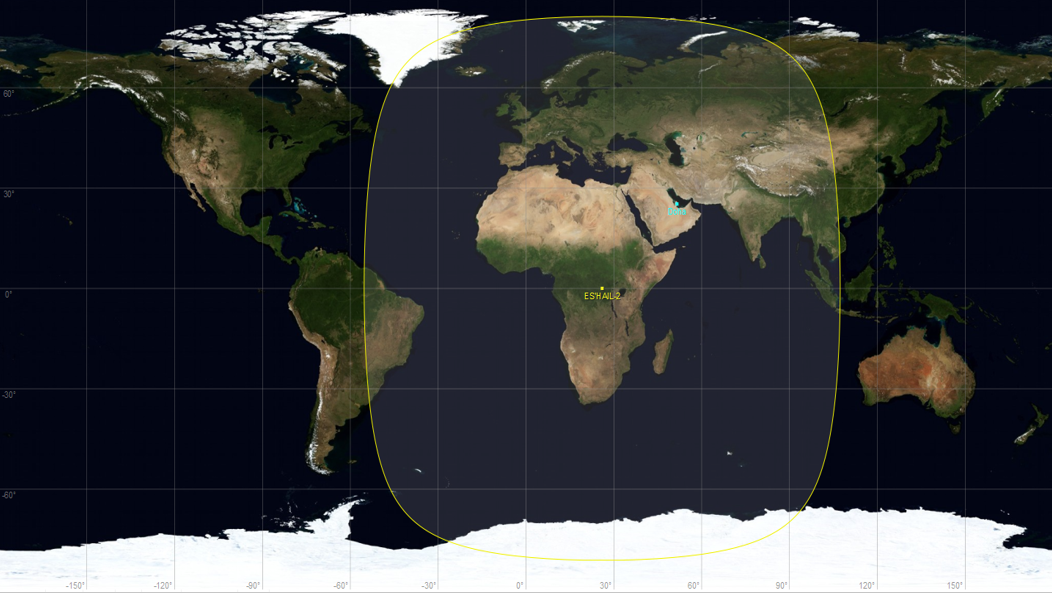